I am a bit ashamed to say that I do a much better job with Mother’s Day than Father’s Day. Please don’t misunderstand me. My father, father in law, and husband (father to my children) are all really incredible men. I don’t slack because of some undeserving in them. I slack because I’m a slacker. Slacker’s gotta slack, you know? (And now you all know I was a teenager in the 90s.)

I think the problem is more pervasive than just with me. Take a look at commercials leading up to the two holidays. There is definitely a bias toward Mother’s Day. More generally speaking we have a media problem presenting fathers in a positive light. From Homer Simpson to present day, fathers are often the blundering doofuses of the family whom the wife and children must tolerate. While I do agree that some dads are duds, there are so many more dads who provide a positive counterpoint. 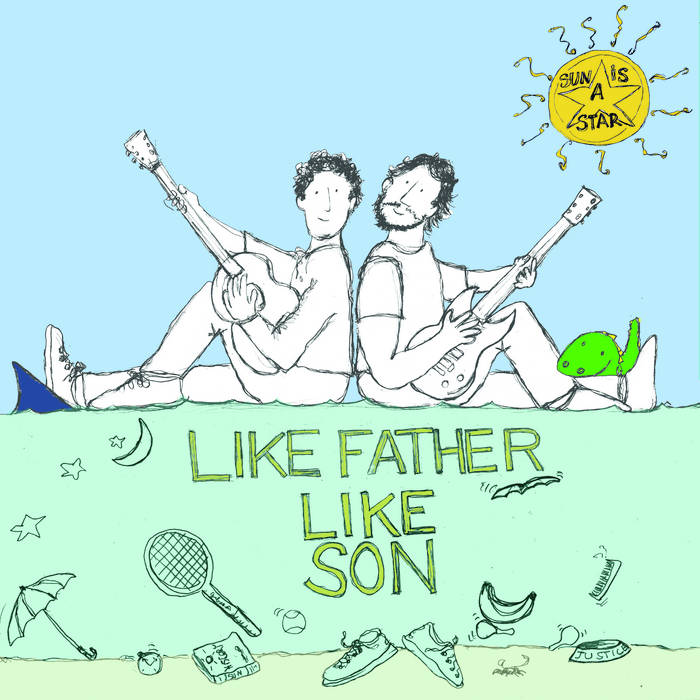 I received this album free of charge for the purpose of this review.

I think that’s why I loved Sun Is A Star, a new album by Like Father Like Son so much. They are a father and son duo, each an experienced kindie performer in his own right. They’ve teamed up for this great album to celebrate so much of what is good and fun about fathers and the special bond they can create with their children. Musically they take the listener on a ride through several evocative genres.

You may find some songs familiar, like Day-O. Most songs, however, were composed by the duo or their friends. She’s a Dog was their first collaboration, composed when young Frank was only 2 years old. Conversely, Tennis Racket Song was composed by Lou fresh out of high school. It’s one of the earliest songs Frank remembers his father singing. I think it’s my favourite. I love the imagination and perserverence of the young musician. These Gallo family treasures are sweetest of all.

Without any of the sappy sweetness that would many people away – including the men in my life – this album presents a charming peek into the delights of home life with an engaged father. Truly it sets an example of being present with our children that we would all do well to follow. Pick up a copy for a father whom you admire. Then spend some quality time this weekend appreciating your fathers and enjoying your children.