I am incredibly blessed to be the Mother of two darling children. I had my first, a girl, in 2006 and my second, a boy, in 2011. Being a Mom is an incredible blessing that has enriched my life in so many ways.

When my husband and I decided to start trying to conceive I read every book, logged every symptom and took my temperature every morning. Three months prior to this I had stopped taking my birth control and other medication I was on. Since I had never been pregnant before I wanted to make sure I was doing all I could to help things along. For the two months, I was a nervous wreck. I kept calling my Mother and telling her that I was never going to get pregnant only to find out a week later that I WAS! Thankfully I was able to conceive my two children rather easily but I know that is not the case for many of my friends. I have seen quite a few of my friends struggle with infertility and it breaks my heart. These dear friends would do anything to have a child of their own. I decided to do some research to see if I could find anything to help these friends whom I love so dearly. I recently discovered The Stork OTC which assists in your chances of getting pregnant. The Stork doesn’t require shots, scans, prescriptions, procedures or a doctor’s appointment.

So what is The Stork OTC? 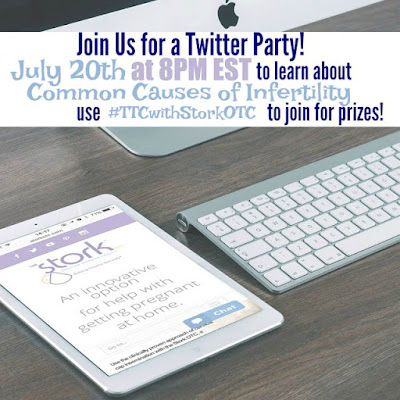 Are you interested in learning more about The Storck OTC? Join me at a Twitter party on July 20th at 8 pm EST by using the hashtag  #TTCwithStorkOTC.

Purchase 2 Stork OTC’s at Target between July 16th and the 19th and get a $30 Target Gift Card.
You can also save 25% on a Single Device at the Stork OTC Store through the end of July

This is a sponsored conversation from Mums the Word Network and The Stork OTC. All opinions are my own.

This is really wonderful, I know a couple of people who wish to have kids but find it really difficult, I should share this with them

oh I never heard of this before. Nice to know there is a great option for when I’m ready to start a family. Thanks for sharing.

My goodness! I had no idea such a thing existed. I hope your friends are able tfor conceive soon.

Great to know of this, my 2 friends are trying to conceive from past 3 years & they are not just getting it. I shall share it with them. Hopefully, if something good can happen in their lives! Thanks for sharing this.

I’m so thankful for products like this to help women who may struggle or have difficulty getting pregnant. It’s amazing how far science can bring us.

Children are such a blessing. I hope that this product is able to help many out there hoping to conceive.

Since I’m not exactly in the market to get pregnant, I have not heard of this one. It sounds perfect. I’m sure this process is exciting and nerve-wracking.